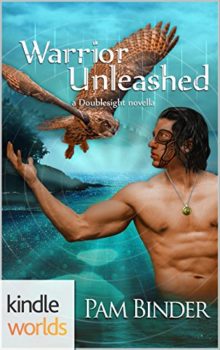 Native American warrior and shapeshifter, Max’inux, prefers his killer whale image to his human image. When he shifts into his human image the darkness and need for revenge can take hold. With the hope of redemption, he sets out to rescue the son he never knew. But when he hears a telepathic cry for help and then a woman’s warning to stay away, he knows that he must face his demons on Whale Island. The woman he loves is trapped there: the one place he’d vowed never to return. He suspects a traitor has infiltrated the Island and joined with human-only to exterminate the doublesight. In a race against time, Max’inux must rescue his son and reach the woman he loves before it is too late.

In this sequel to Warrior Rising, Warrior Unleashed is filled with the mysticism and shapeshifting legends of Native American and First Nation totem animals, the depths of love and the realization that we are stronger together than apart.

Other Books in Shape Shifter Series

Sign up now to receive sneak peeks at Pam’s upcoming books along with special contests and excerpts just for subscribers!

Pam Binder is giving away a $20 Amazon Gift Card, a copy of THE INSCRIPTION and chocolate to one winner.